Automatic taps save water, which only flows when hands activate the fixture. Excess water use is no longer an issue solely for conservationists, but also for the budget-conscious. People who move slowly often allow taps to flow longer than necessary, or forget to turn them off when they are done washing.

If a washcloth or paper towel settles or block the sink, this can trigger or send a false signal to Autotaps or electronic taps, hence forcing it to dispense water unnecessarily. But should this happen, Autotaps incorporate state-of-the-art technology that shuts off the water valve after 30 seconds avoiding any risk of flooding.

Water conservation can be the main reason to purchase automatic taps and can be seen as an investment, and they pay for themselves in reduced water consumption and maintenance costs. The savings were obvious; there are several push-down taps, self-closing tap but their self-closing valve can take longer to close hence wasting more water!

Comparing manual taps and Autotaps after using them for more than 500,000 cycles, Autotaps uses an average of 0.20 gallons of water per use, compared with 0.65 gallons for the manual tap. After taking the costs of energy, sewerage, and maintenance into consideration, Autotaps decreased water and energy usage by 70%. View facts and charts here 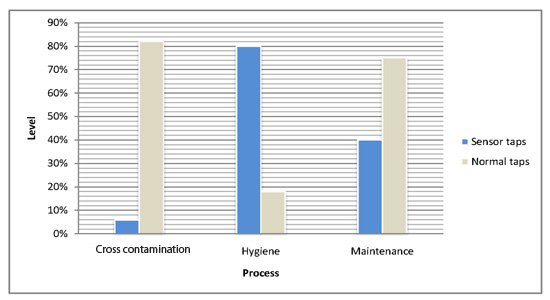 Users can save up to 70% on water conservation when compared with manual activated taps. A lot of water is wasted when turning the tap on and off manually. With sensor taps, the tap is activated or deactivated within 0.5 second, and does not drip, a common problem with manual taps.

There's more energy needed when producing sensor taps, but this greatly reduced when it comes to the amount of water it saves long-term. With manual taps, a lot more water is wasted, which means that a lot of energy is needed to re-process the wastage water back to the consumer.

With sensor tap, less water is wasted and less water for processing plants to process. The level of energy saved is usually not apparent at short-term, but adds up at long-term basis.

Tell us what you want, and we'll do the rest.